Choosing portraits for final print and exhibition was tough. I had methodically photographed every scout I came across along with support staff, elephant keepers and even a few elephants. I did shoot a handful of landscapes on the sheet film and also tried to use the medium format for less portrait work.

When it came down to it I had to choose seven portraits for print and framing on their own. Five to be printed at 69 x 55cm were part of a series of seven, of which I had to reject two due to cost of framing and wall space. The remaining two were individual portraits to accompany a landscape/documentary image and were to be printed at 138cm x 110cm.

The first portrait of Chris, titled Simple Needs, sees a scout dressed in Camo gear with his weapon in his hands. On initial viewing it looks like a scout in the bush doing his job. On closer inspection it becomes apparent he has no boots on. 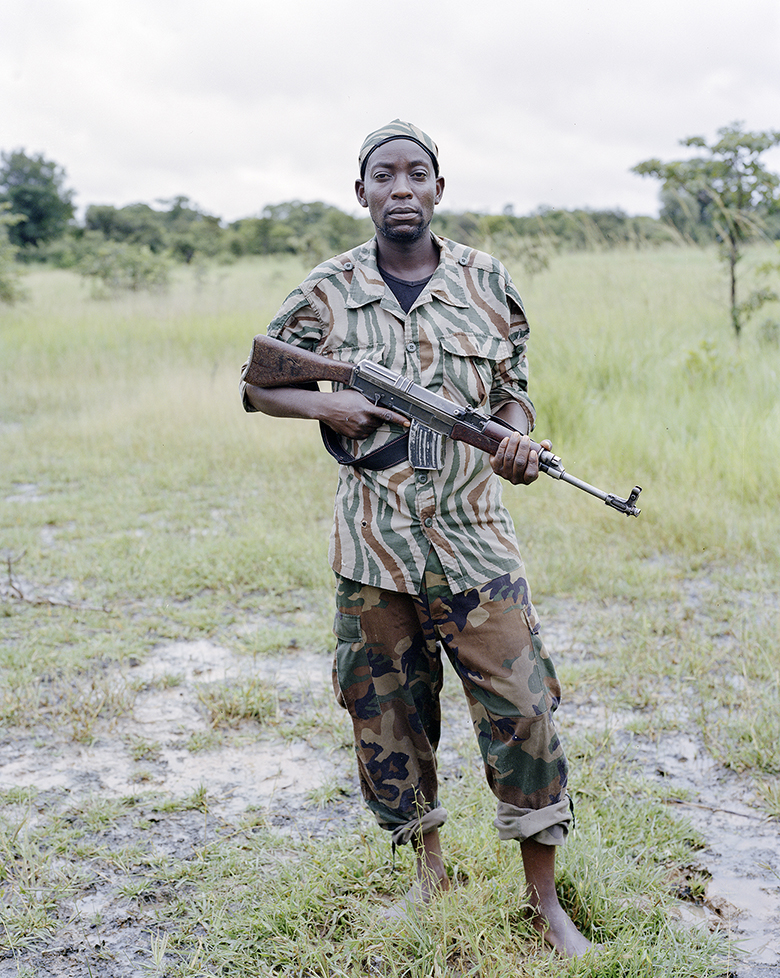 The image of Chris was shot whilst out on a 15km+ foot patrol. It had rained most of the patrol so when the weather broke briefly we stopped and set up the camera to shoot portraits of the patrol members. Making Chris take his boots off raised a few laughs at the time but doing so highlights a serious point that a decent set of boots is essential for anyone operating in such a harsh environment. The boots he removed were tatty old gum boots.

The second portrait is Obby, titled The Ordinary Man. A softer portrait in some respects but still equally intriguing. We arrived at the Anti-Poaching Unit located just south of Lake Itezhi Tezhi in the late afternoon. As we arrived at the Headquarters building a group of men were loitering. They were not really dressed in any sort of uniform so we introduced ourselves and got chatting. They were just going on leave. Some of them lived nearby in accommodation provided by Game Rangers International. Others lived a little further away. I quickly photographed everyone with a digital camera as I didn’t think I would get any more time with them. It then transpired that the unit vehicle, a pick-up truck, was in such a poor state of repair that it required a little coaxing to get it going. 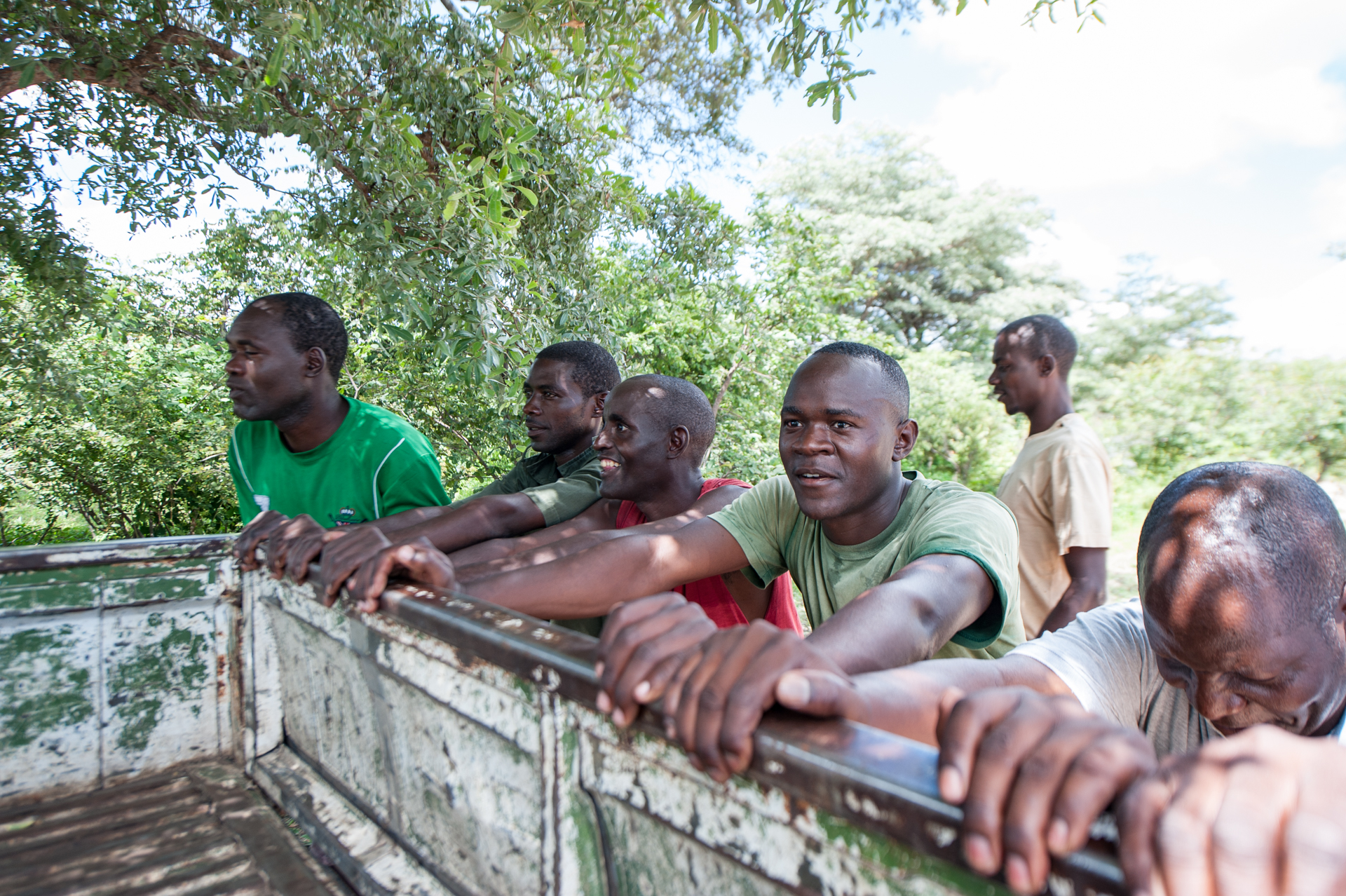 Obby and the rest of the team had to stay to push start the truck. I took my chance and set up the camera. I had roughly ten minutes, I chose to photograph Obby and one other as they had bold coloured shirts. I figured it would stand out against the grassland in the background. Plus he had stood well when I photographed him with the other camera. I didn’t really find out much about Obby except that he was going home to his family and needed to travel 80km to get there. Some of that journey would be on foot, some by bus or any vehicle that would stop for him. He made the journey every twenty days. I mostly talked with him about the difficulties of his journey while we waited for a few minutes, as he lifted his hands and turned to face the sun slightly I took the only shot on film I have of him. Odd that I learned so little about this man yet I feel like I’ve known him for years. I hope I meet him again one day. 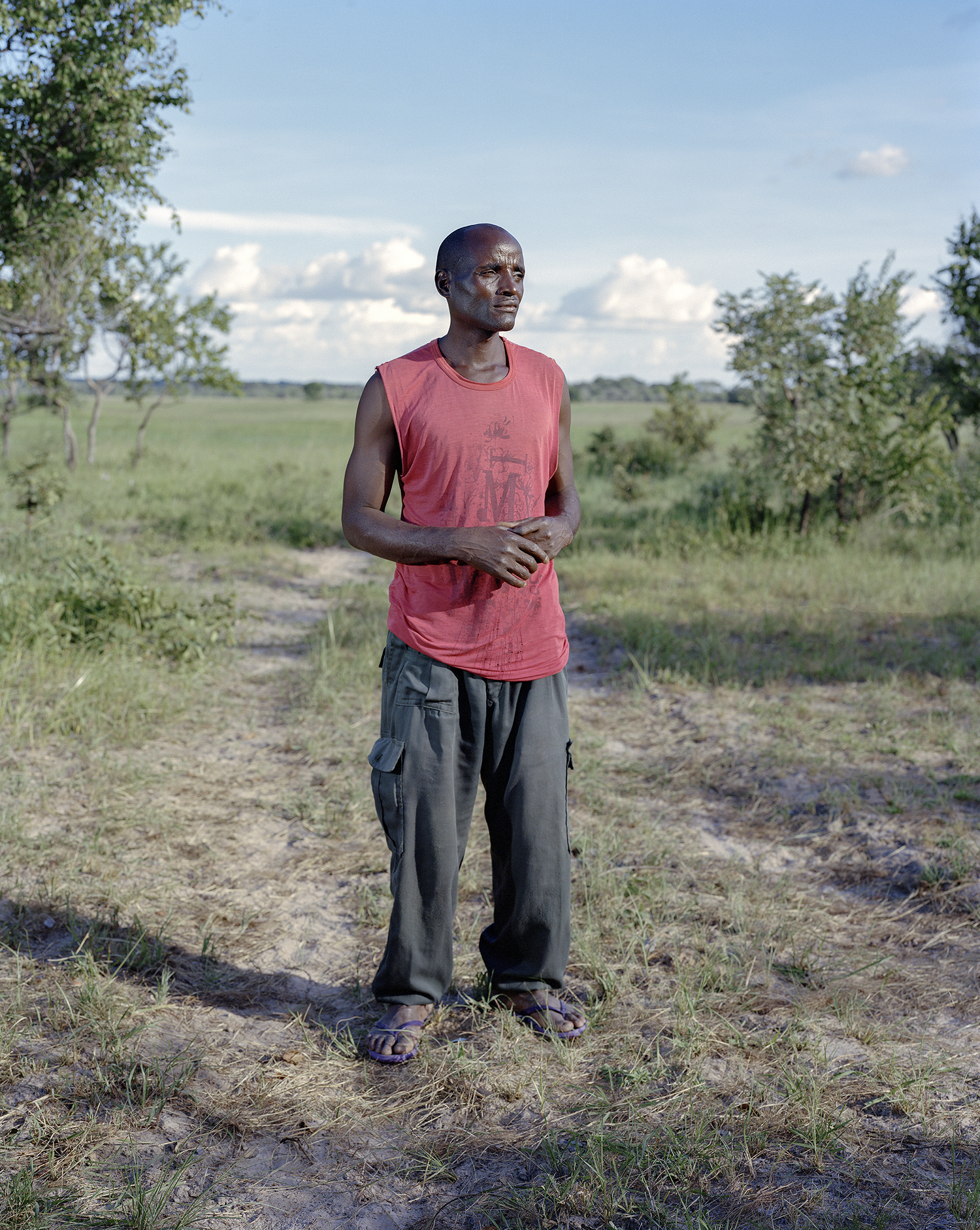 The final large image produced for exhibition was an image of a set of gumboots in the bush, titled Apparition as there is almost an impression of a scout still stood there due to the vegetation. The boots belonged to a member of Fish Eagle Special Anti-Poaching Unit patrol. One of the first things I noticed when we left camp on a local foot patrol was that the scouts were patrolling in wellington boots. It was clearly the preference but some of the scouts did use traditional military jungle boots. During rainy season the ground is wet so gumboots do make sense but the boots in the image were split across both soles. Without socks I could see Kebby’s feet through his boots and when I chatted to him he didn’t seem that bothered. I also asked him about his scars on his arms and face but he didn’t want to talk about that either. I got the impression he just got on with his job and kept his head down. I captured multiple portraits of him because of his scars and strong features and because I’d seen the state of his boots I gave him my set. They were brand new and I’d used them twice before I handed them over. I wish I could’ve handed a new set to all of the patrol members. 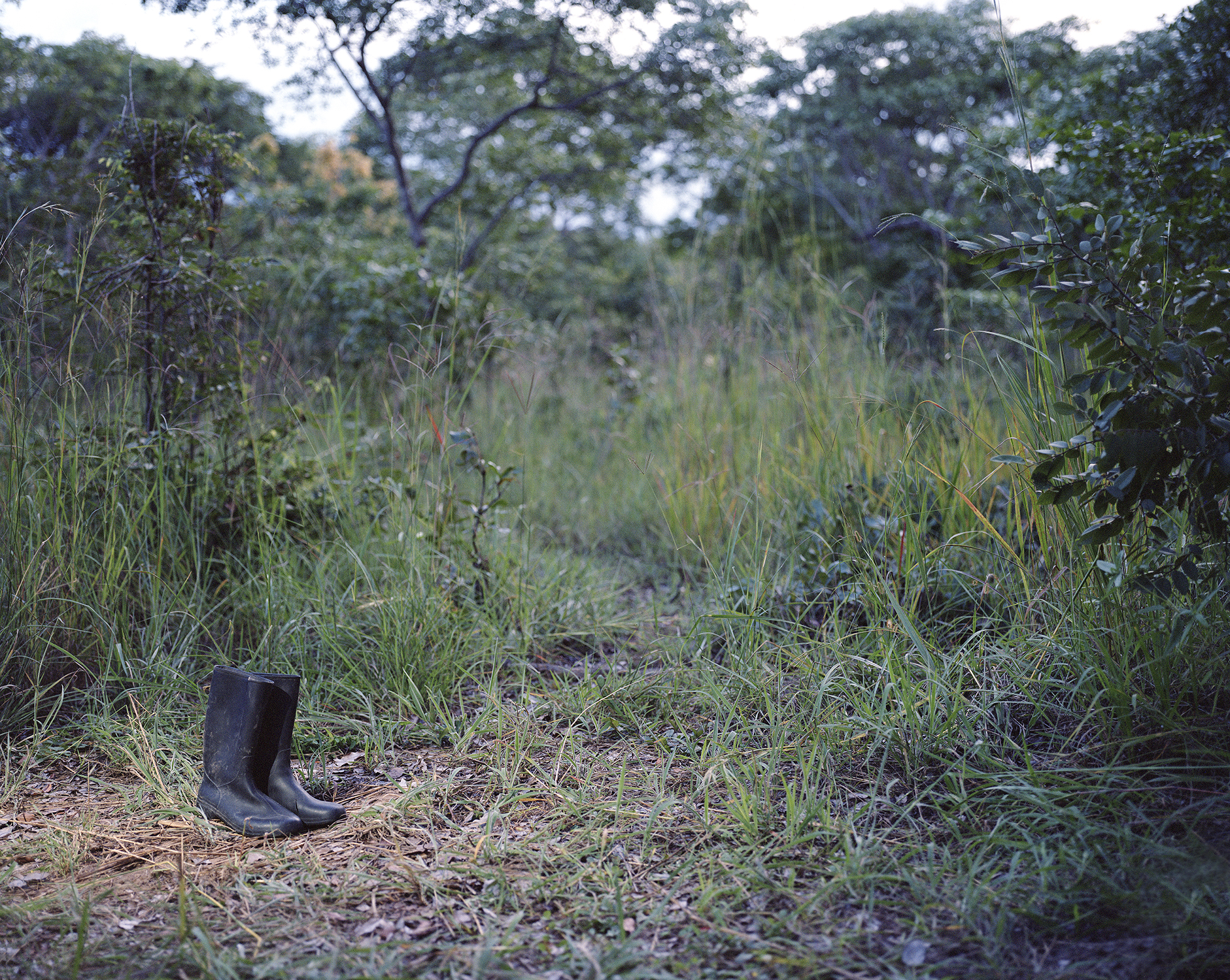 The smaller series of portraits were shot whilst further North in the National Park. Every month Game Rangers International pay the wages, re-supply rations and deliver stores to Anti-Poaching units they are responsible for. One of those units is the Kabanga APU, Callsign Red Lechwe, based on the edge of the Busanga Plain. They are the men in the pictures. Seven men in total, I photographed them all at the end of a three day visit to their location. During rainy season the area near their camp is notoriously tricky to negotiate by vehicle. Our two vehicle convoy with the rations onboard tried to cross an area of open ground within 3km of Kabanga camp and got stuck. We tried unsuccessfully to extract the vehicles so had to give up as darkness fell, due to the threat from lions in the long grass. The next day the scouts arrived after walking 25km to help us. After unloading the rations from the vehicles we managed to free them. The scouts then helped move the rations over five hundred metres to one of the vehicles enabling the onward journey to continue. With one vehicle safely on the home bank the scouts returned to help ensure the second vehicle got across. Once their work was done I got them to stand on a termite mound in the late evening sunlight so I could capture them as they were, covered in mud and happy to have wages and rations. Proud men who clearly love their jobs and who came to our rescue. 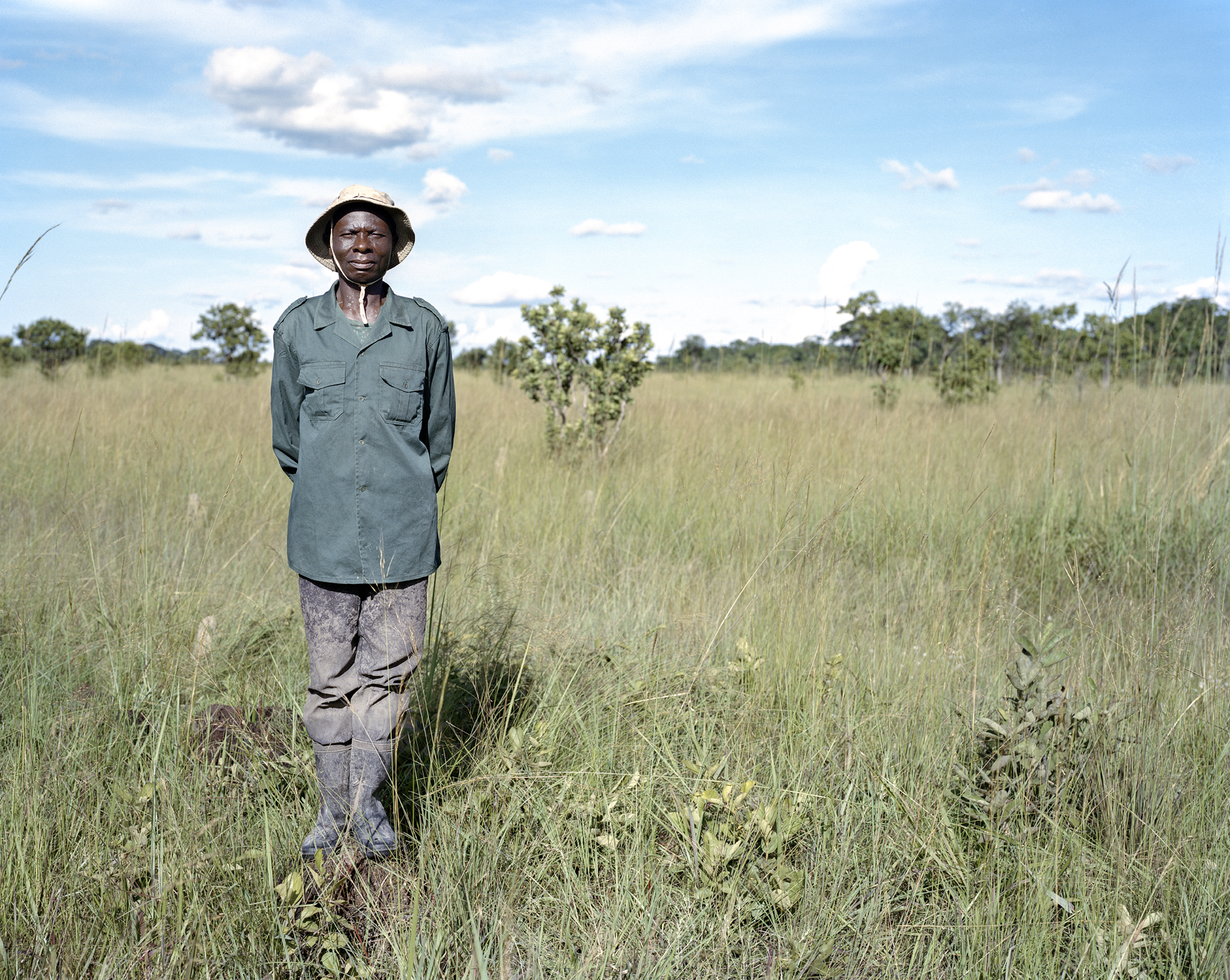 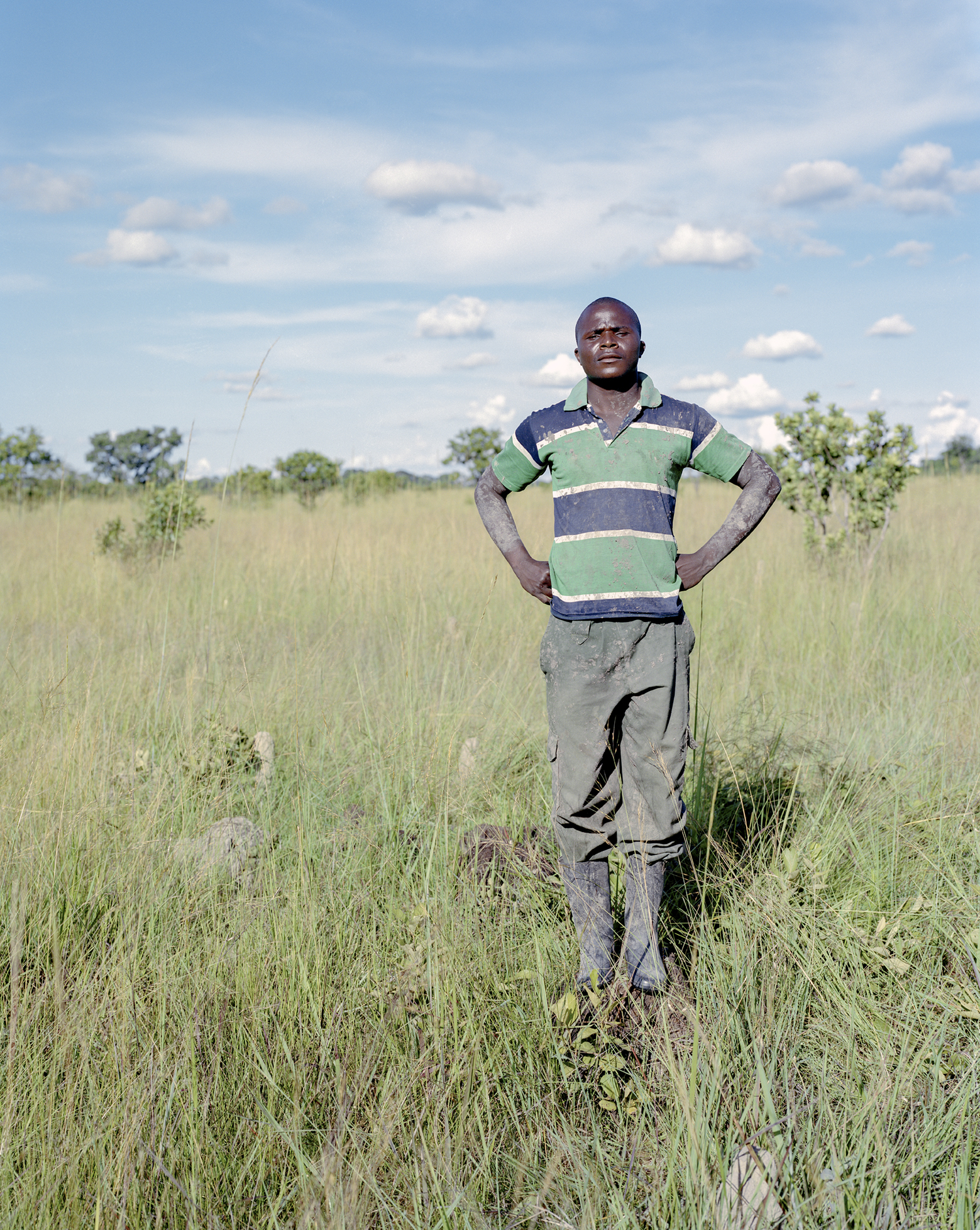 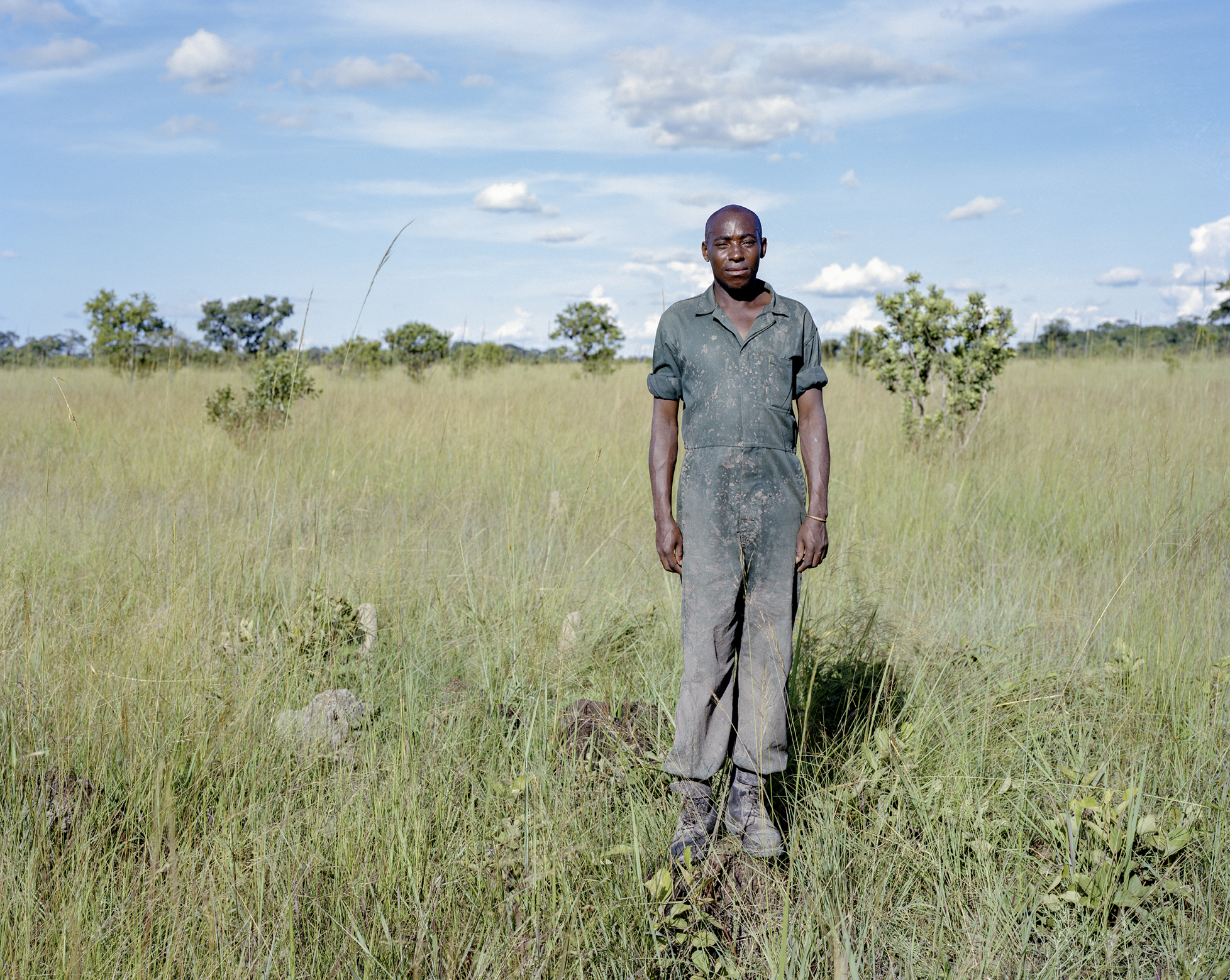 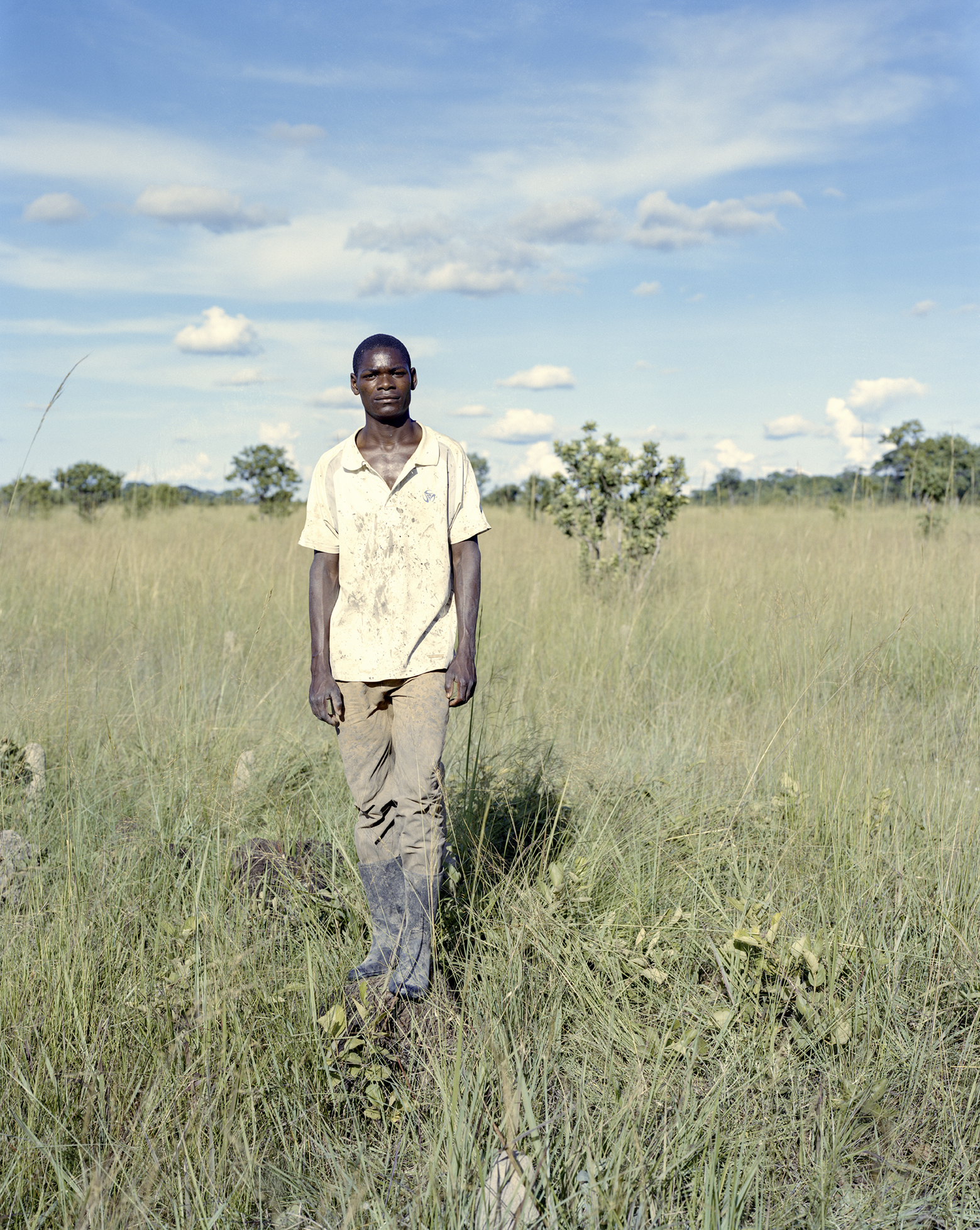 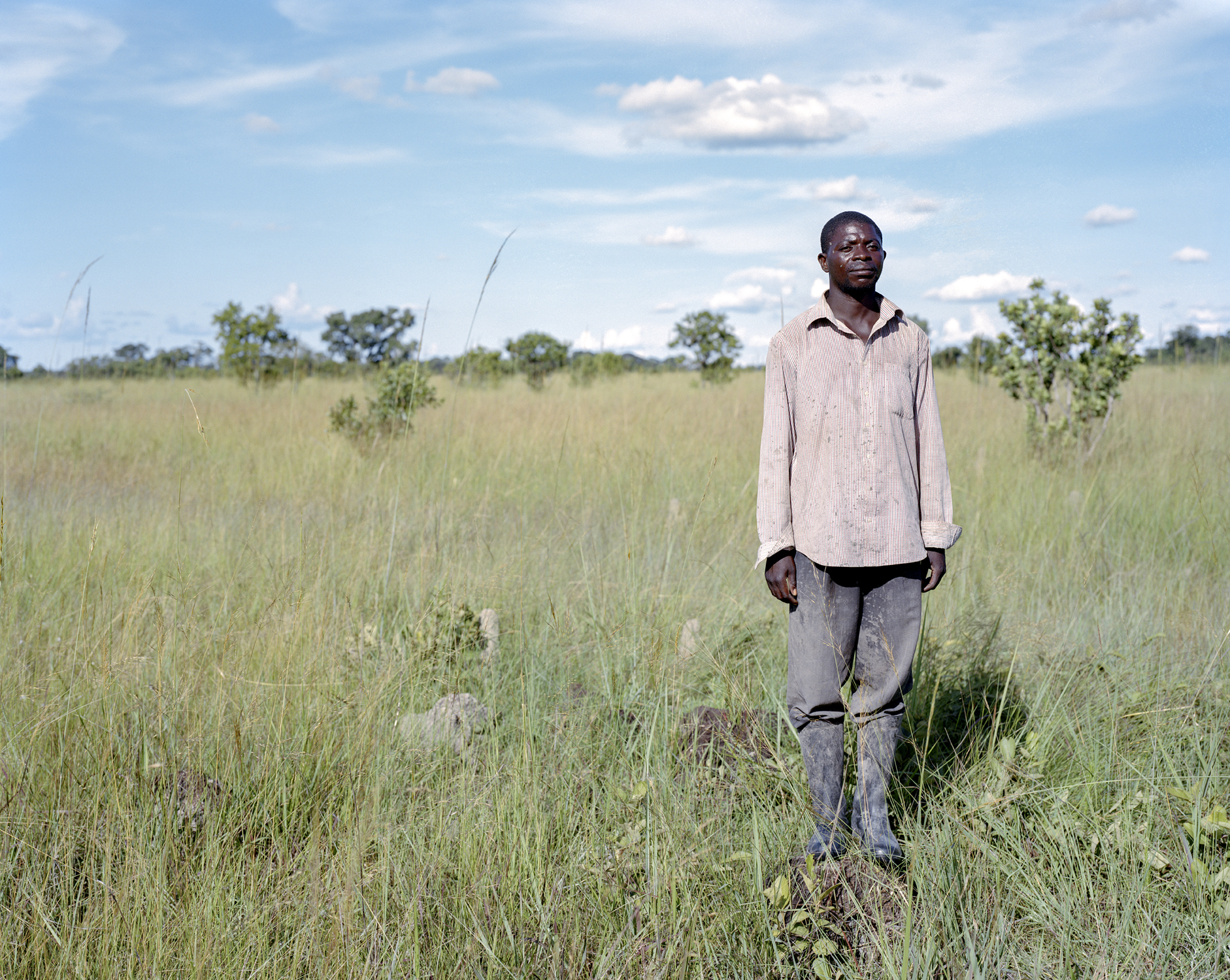