As you have seen in my previous post The Bigger Picture project was a huge undertaking in a short space of time. If it hadn’t been for sponsors and the hard work of everyone involved it would probably still be in the planning stages. As it was, Myself, Freddy and Dieter travelled to Zambia at the beginning of February 2017 and returned on the 1st March. One month to get to know the people as well as create art, photographs and a documentary film.

I’d mentioned it in my Emulsive interview (separate blog) that I wanted to achieve a series of large format environmental portraits. I managed that and more in the space of one month in Africa but I came across a few challenges in doing so.

I’d already done a short trip to Tanzania in late November 2016 for a newspaper piece with Freddy. I used that trip as an opportunity to test equipment and film stock ready for Zambia. The sheet film on the Tanzania trip survived six passes through x-ray machines with no ill effect so I was happy with the film stock I needed to take. Weight limits were an issue for Zambia but I knew I needed to take everything I could so sharing kit around the team worked well for travel purposes.

I carried both my digital 35mm bodies and my full range of lenses, plus strobes and rechargeable batteries. For film work the Hasselblad, two backs with 80mm and 50mm lenses. The Toyo45a, 150mm lens plus ten darkslides finished off my main equipment. I carried two tripods, Manfrotto for the smaller cameras and the big Gitzo for the large format. Finally I took the little Fuji Xpro1 for my pocket.

Following a standard flight via Addis Ababa we arrived in Lusaka to be greeted by our fixer. He basically got us through customs with all of our camera gear then on our way to Lilayi. In Lilayi there is an Elephant Orphanage that is supported by DSWF and run by Game Rangers International so we spent our first few days there. After a day or so of acclimatisation and chatting to the staff we moved further North. We would return at the end of the trip for a slightly longer stay and to do some work with the keepers and elephants. Mainly for Dieter’s documentary film.

Our main accommodation for the duration of the trip was tented, at a place called Mukambi on the banks of the Kafue river. We were looked after by Game Rangers International (GRI) for the whole month and primarily by the staff of the Kafue Conservation Trust. A mixture of ex-pat Dutch and Brits plus locals employed by GRI. The staff ranged from chefs to mechanics and they looked after various establishments. All related to Anti-poaching and all were photographed. 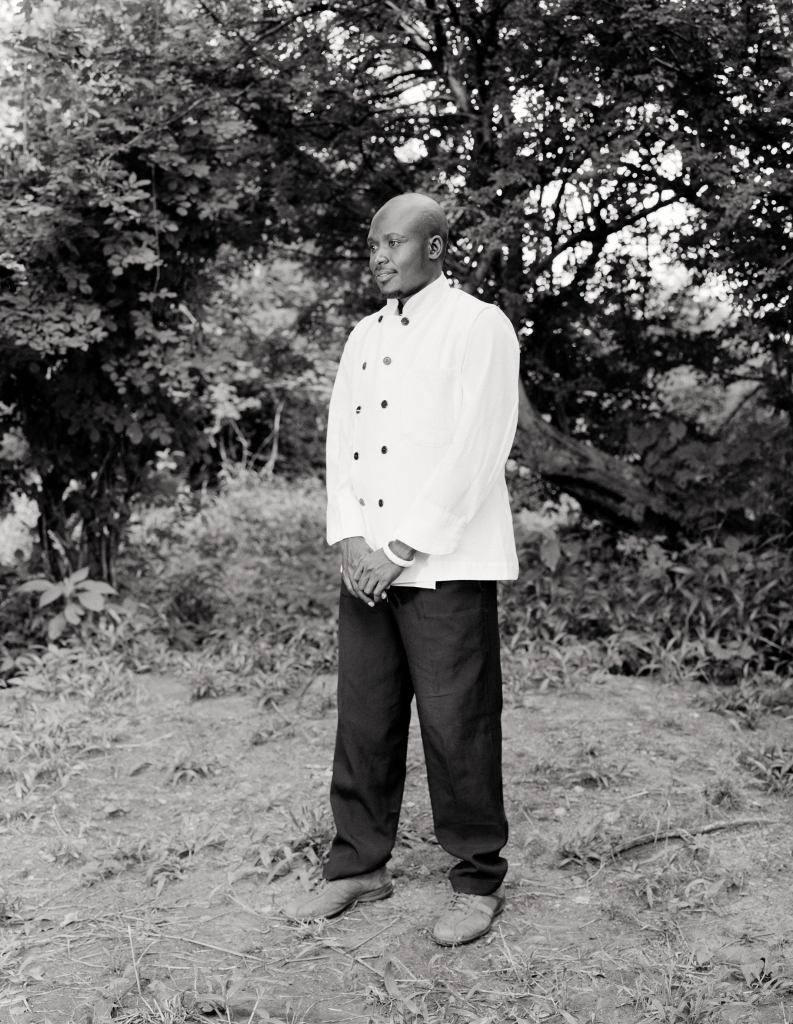 Conscious of the limited amount of days in country, I had to try and condense the time I used to get to know people before I started photographing them. I don’t like to just wade in and stick cameras in faces. Thankfully having a military background helped and chatting about soldiering, equipment and life as a scout in general broke the ice well. I also found that family is important so talking about being a father helped. It wasn’t long before I started taking portraits as well as general documentary shots. The shot below is the very first I captured on the Toyo45a. 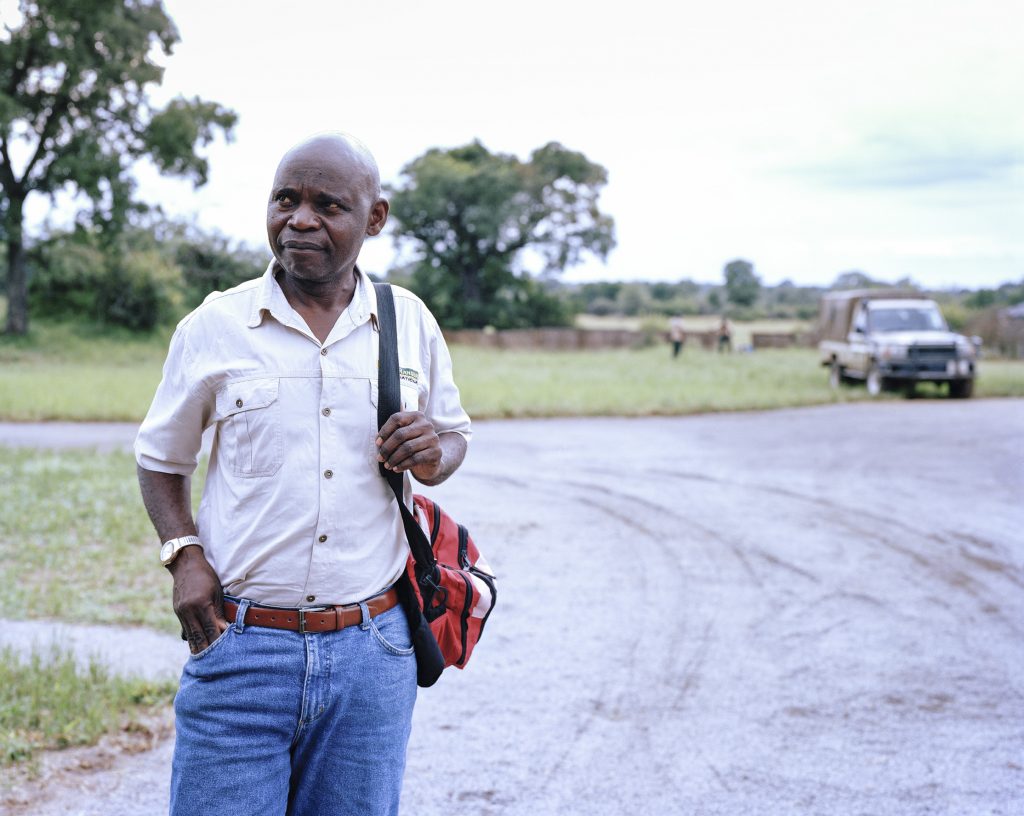 Operating in the established camps was fairly straight forward. The only major issue was power so good battery management and some forward planning was needed when using the digital cameras and my laptop. I knew power would be an issue anyway and that was partly the reason I chose to take the Hasselblad. Having the ability to shoot handheld as long as I had film was crucial. I had a couple of AA batteries for my Sekonic light meter so if I’d ended up using Sunny 16 it would’ve meant I really was in dire straits.
The weather played a part too, particularly once we got out in the field with the scouts. As a rule I pre-loaded my sheet film into dark slides before I left the relative luxury of my main tent. It was rainy season but still fairly warm so I tended to do this at night when it was a little cooler so my arms were less prone to sweating in the dark bag. The only time I had to change any in the field was when we managed to get our vehicles bogged in trying to cross an area of open grassland. Three days trying to dig ourselves out meant I’d used more film than expected so I tried changing in the field. This led to one of my only real issues with the sheet film, resulting in what was technically failure. Emulsion side in on two sheets due to rushing, trying to avoid sweating too much. I did have a two other sheets I failed with, down to exposing the same sheet twice and not resetting the aperture prior to exposure on another occasion. Ultimately two complete failures out of 75 sheets was pretty good. The two partial failures actually came out and I quite like them so I’m not classing them as failures, more like happy accidents. 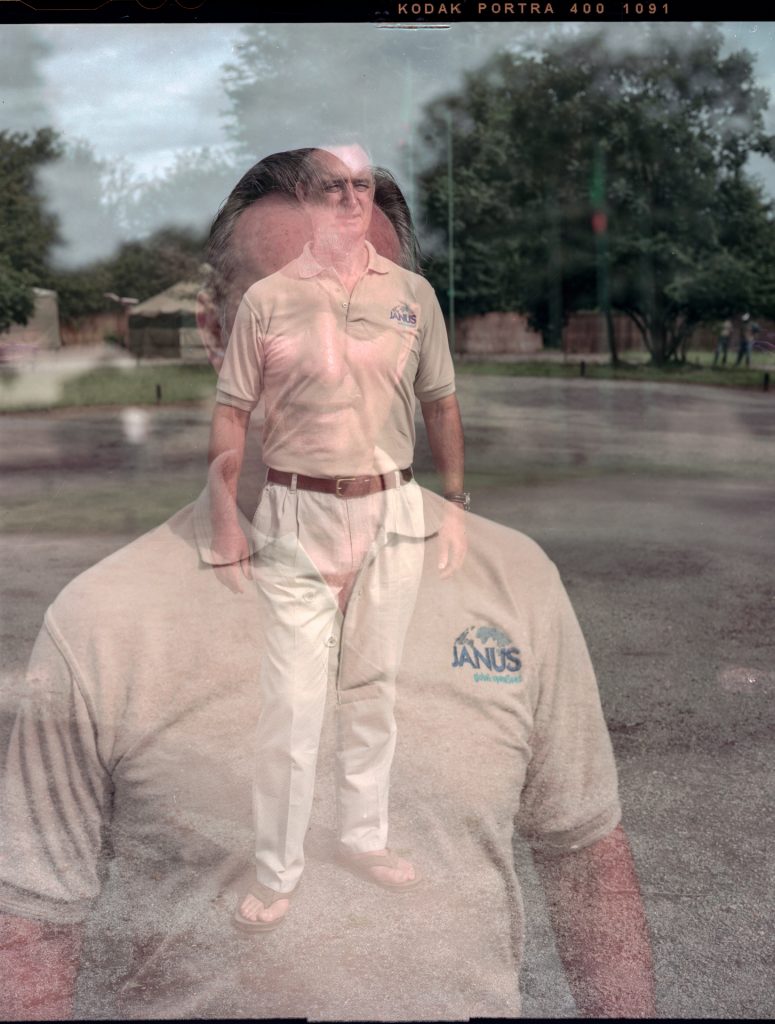 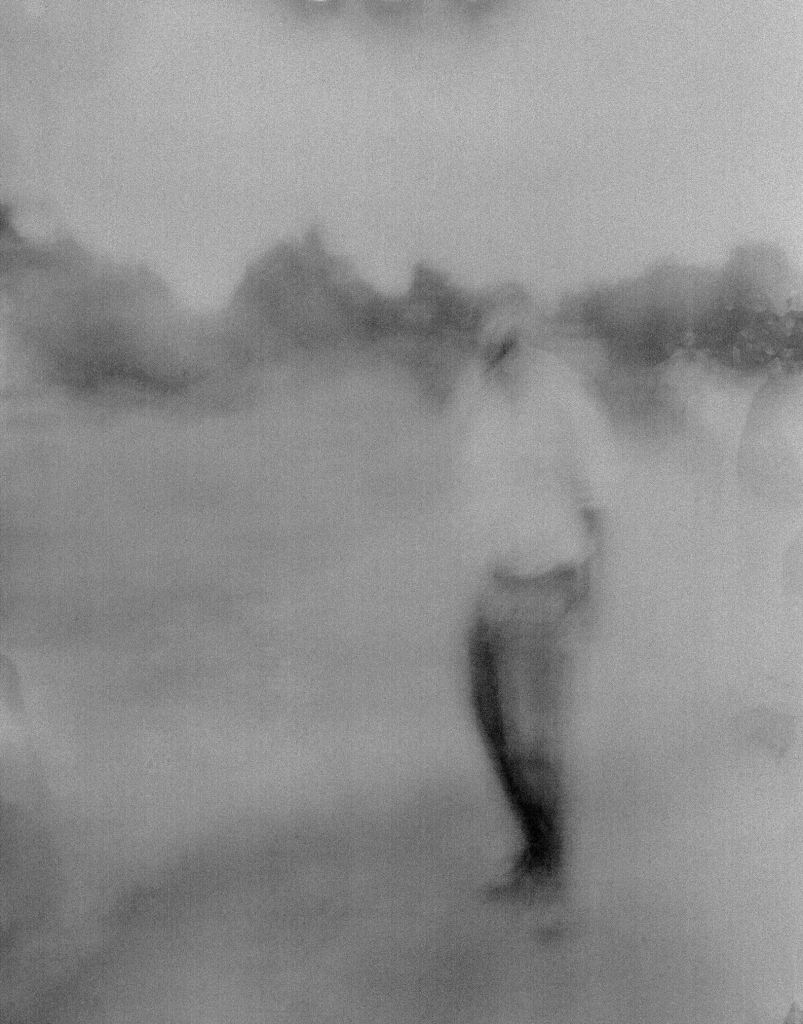 The Hasselblad coped well with the moisture apart from the odd bit of misting on lenses, as did the digital cameras. I carried everything on patrol with the scouts as we never knew what to expect. This made it tough to keep up sometimes as the scouts patrol with minimal ammunition and don’t carry any extra equipment. This is not through choice, they simply don’t have access to the equipment. The whole point of the project was and is to raise money to buy equipment, as well as raise awareness of their situation. Fifty percent of anything made from sales will go directly back to them. 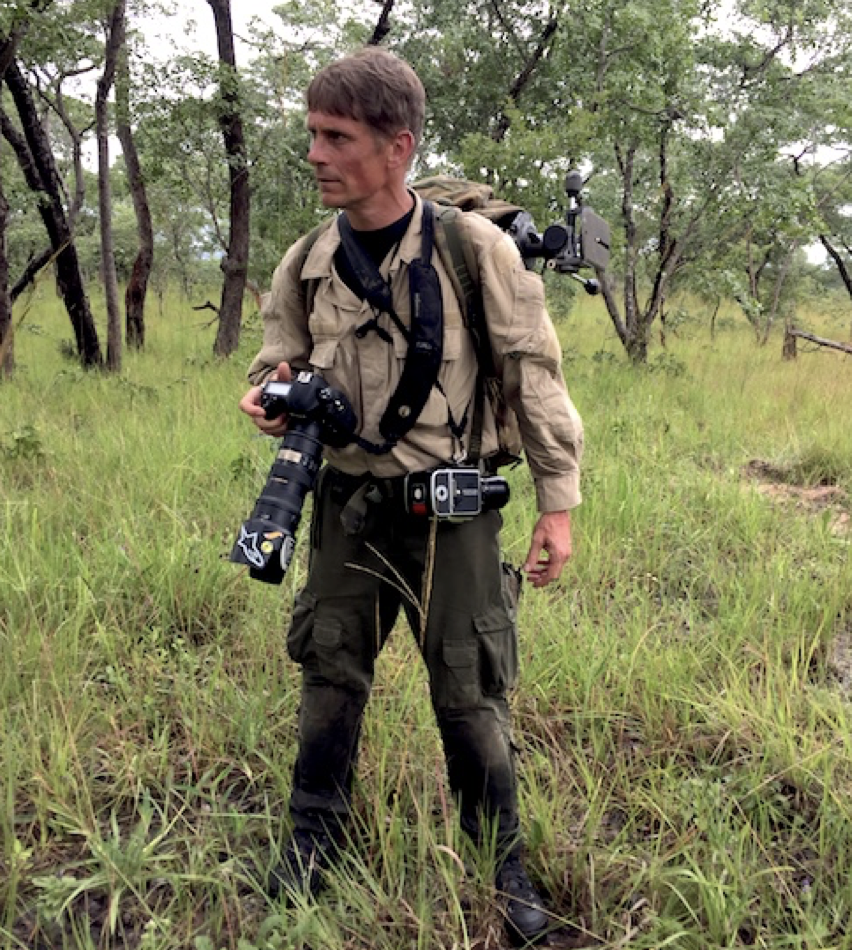 Often the situations were quite fluid so having the Nikons with the metering and fast focus was essential. Sometimes we were able to stop and relax so I would shoot some with the Hasselblad, even got the Toyo out a few times in the bush to shoot portraits. Got some funny looks but everyone I photographed seemed to relax in front of the camera. The only way I can describe it is that the scouts had never been photographed before in such a way. They almost ignored the camera. That is always my intent when I use the Hasselblad and the Toyo anyway but it was very pronounced with the people in Zambia. 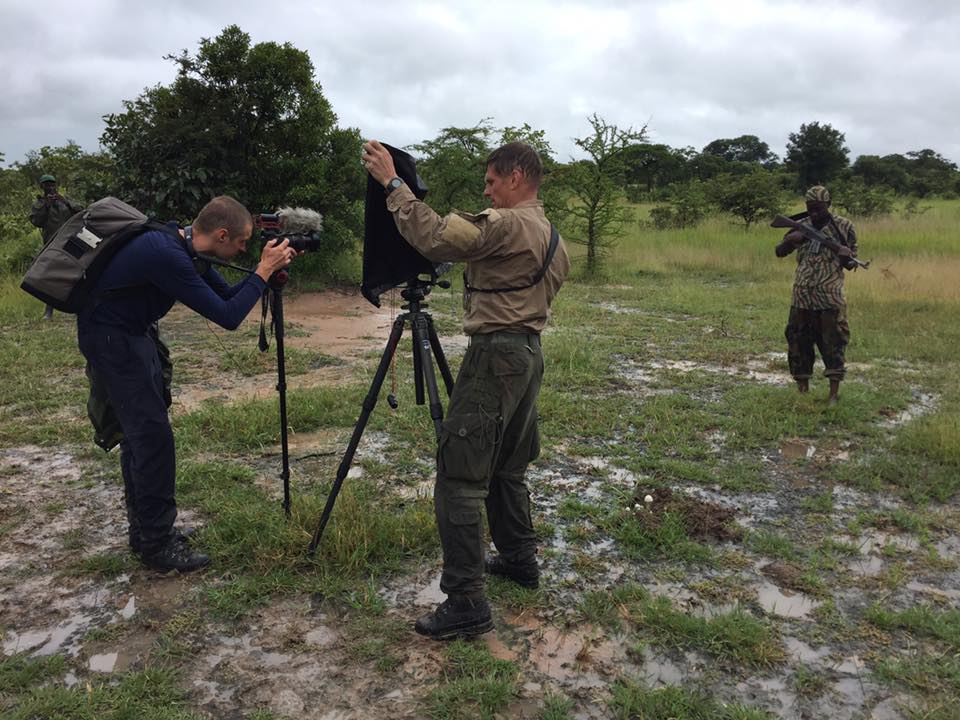 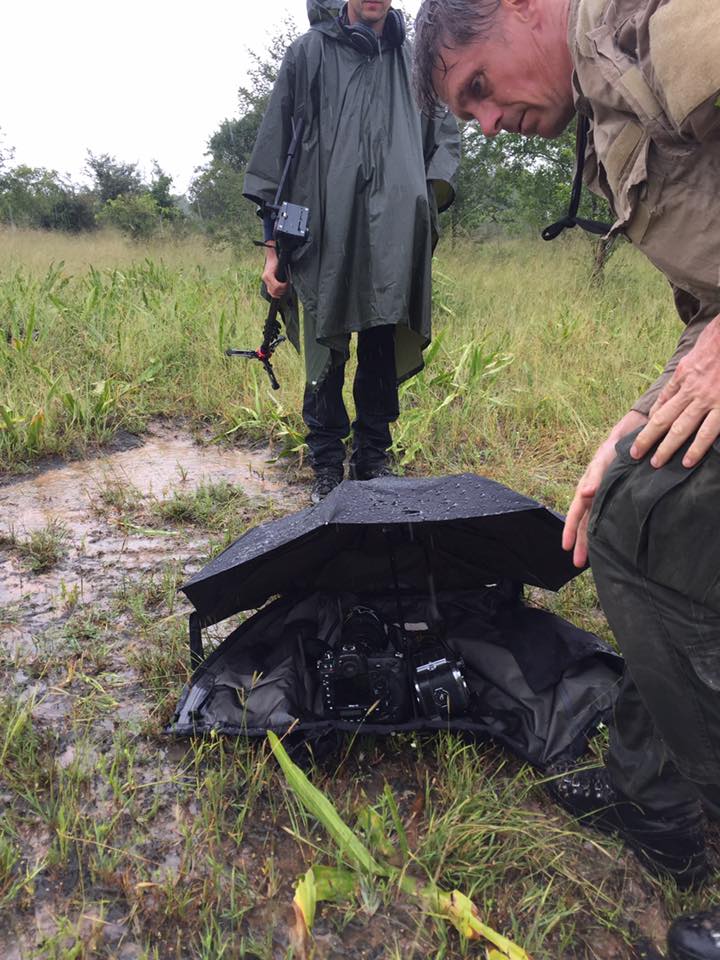 Overall shooting the way I did in Zambia paid off. Getting to know the scouts then taking their portraits seemed so much easier than I expected. I knew that setting up, chatting with each sitter and observing rather than taking multiple shots would work. I really wanted to humanise these men in a single frame and show people that they are simply people doing something about a problem that directly impacts on their welfare and future.

I’ve included a few images with this post but my next post will be about individual images that were exhibited and why, when and how they were made.